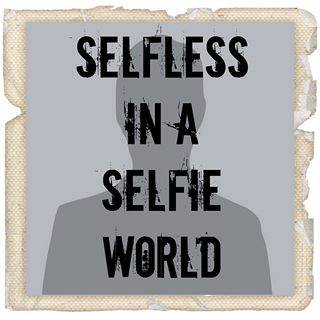 The word ‘Selfie’ had a banner year in 2013 after being named the Oxford Dictionary’s ‘word of the year’ and use of the word went up 17,000 percent!

A photograph that one has taken of oneself, typically one taken with a smartphone or webcam and uploaded to a social media website: occasional selfies are acceptable, but posting a new picture of yourself everyday isn’t necessary

It’s cultural impact is hard to ignore after Ellen Degeneres’ selfie with A-list celebrities from the Oscars was shared and retweeted over 870,000 times in one night.

The ‘Selfie’ has become a normal part of our society; studies show that nearly half of all U.S. adults have taken a selfie.

In his article “10 ways to be selfless in a selfie culture" as it relates to careers Brent Reinhardt says:

This isn't necessarily a new phenomenon. Self-portraits have been in existence since the invention of photography. But, with the dawn of social media, we now live in a world were self-value lies in the size of your digital network…and in getting reaction to those “selfies.”

While it can seem relatively harmless, there's definitely a part of the “selfie” phenomenon that makes us think of words like “narcissism” and “self-obsession.” In this social media age, even if we don't take photos of ourselves, we are all guilty of being overly self-promotional at times and inadvertently (if not on purpose) linking our self-worth to likes, shares and comments. Our identity becomes defined by how many friends and followers we have on Facebook, Twitter or Instagram and how they respond to our posts.

How does this relate to our youth today?

We’ve been studying God’s Love recently, more specifically God’s Love as a part of His Character, God’s Love in it’s greatest display through the cross and how we’re called to show or display God’s Love as those who have so generously received it.

In terms of our own identity it is now to make up who we are as Disciples of Christ when we’re told in John 13:35

By this all people will know that you are my disciples, if you have love for one another.

ALIVE is made up of many different identities; smart, nerdy, funny, quiet, outgoing, artistic, musical, athletic, etc.  Stop by one of our meetings and add your own identity to the mix sometime, there's room for you!

Our prayer is that we're not known for personality traits as a part of our identity, we want to be known for showing love to others.

So, for ALIVE we’ve decided to take a week and be intentional with showing love, the self-sacrificing love we’ve been shown, not the self-centered love for ourselves.

Would you consider today how you’re being called to show love to others?

Will you join us by being ‘selfless in a selfie world’?

You’ll see many of the youth have already joined this campaign by changing their profile pics with the image included in this article and using the HashTag #InstaLife on their social media accounts… the hope is, you’ll see even more of us showing love as true disciples of Jesus Christ!