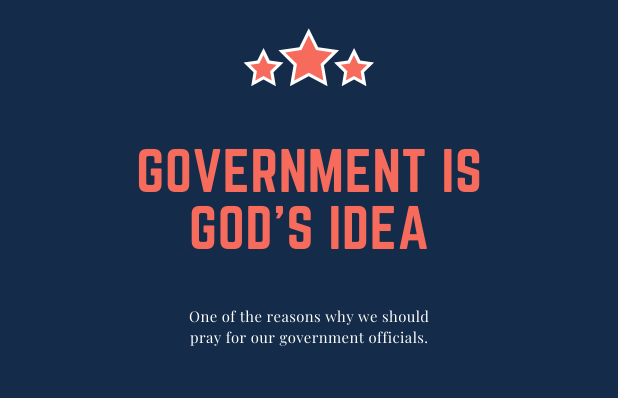 Therefore, our starting place to think Biblically about civil government is that it is inherently good.  Government is good, because, like the family and the church, the government was also an institution ordained and designed by God, intended for our good.

It is trendy today to have a low-grade hatred or an automatic disrespectful attitude toward all government, government officials, and the laws passed by the government.

However, it is also popular today to idolize, almost "worship," certain government officials that people really, really, like -- almost blindly, as if they can do no wrong. When our passion for politics is so intense it functionally replaces our faith, sociologists called this "Civil Religion." The Bible would call it idolatry.

Government is not to be worshipped or idolized --nor is it to be hated or despised.

However, it is clear that we are called as followers of Christ to pray for, and respect government leaders.

"I urge, then, first of all, that petitions, prayers, intercession and thanksgiving be made for all people— for kings and all those in authority, that we may live peaceful and quiet lives in all godliness and holiness."

"Let every person be subject to the governing authorities. For there is no authority except from God, and those that exist have been instituted by God. Therefore whoever resists the authorities resists what God has appointed, and those who resist will incur judgment."

One of the great mysteries of the Christian faith is this: how can we see a politician as "instituted by God" and “offer prayers and thanksgiving” for them if that leader is bad or immoral?  These are difficult commands to understand and follow.  No more difficult, however, than Jesus' teachings to "love our enemies" or to trust God, even when things seem out of control.

As Christians, we are called to earnestly pray for our government officials—all of them.

We see this lived out in scripture. When Steven was being stoned to death, he was praying for those who stoned him, looking upward to Jesus. When Herod arrested Peter, the scripture says, "Prayer was being made earnestly to God for him by the Church." When Paul and Silas were both put in prison, their response was prayer and singing hymns, and as a result, the jailer was converted!

Ecclesiastes teaches us that "there is a time and place for everything." Accordingly, there is also a place to resist, and even disobey government in extraordinary circumstances when it directly opposes a command of God.

To make thinking about these matters even more challenging, in America, our God-ordained form of government is "of the people, by the people, for the people…" to quote Abraham Lincoln.  That makes us as American citizens the ultimate stewards or trustees of the representative government we choose.  Perhaps an even greater reason to pray for our government officials!

Finally, during the past thirty-five years, I have personally known and watched hundreds of men and women enter and leave public office.  Some come out with the same character and values they went in with and serve us well.  Sadly, many others, get entangled in ethics violations, personal sin, and scandal.

We can quickly put elected officials in America on an impersonal and "Superman-like" pedestal.  But they are ordinary people just like us.

They have fears, pain, and stress.  They have marriage problems, financial challenges, and their children do embarrassing and scandalous things.

And while in public office, the three enemies of our soul—the world, the flesh, and the devil are all right there in unique and challenging ways to tempt them to compromise or do evil.

When we understand that Government is God's idea, and was given by him for our good, this gives us a whole new perspective on why and how we should pray for our governing authorities.