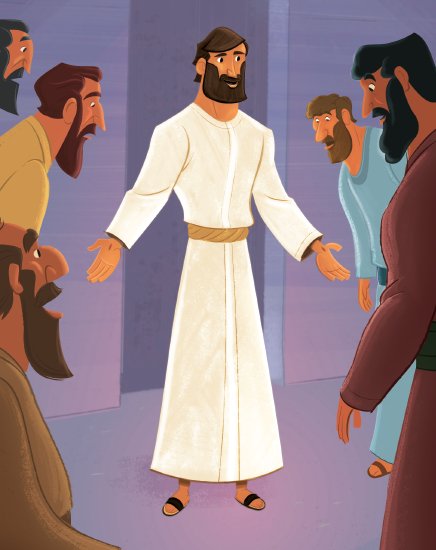 Perhaps one of the most gracious things Jesus did after His resurrection was appear to the disciples, proving He was alive. The disciples were devastated to see that Jesus had died. How could He save them if He was dead? Even though Jesus had foretold His death and resurrection (Matt. 20:17-19), Jesus’ disciples believed by seeing.

Jesus showed the disciples His hands and His side to prove He was not a ghost. He had a real, physical body. Then He spoke to them: “As the Father has sent Me, I also send you” (John 20:21). This verse contains the Gospel of John’s version of the Great Commission. Jesus, the One sent from the Father, was now sending the disciples to be His messengers and representatives. Jesus equipped the disciples with the Holy Spirit to proclaim the gospel.

Thomas, who was not with the disciples when Jesus came, had a hard time believing that they saw Him. Thomas wanted physical proof - and that is just what He got! Jesus showed Thomas His hands and His side. Thomas immediately believed.

Jesus’ resurrection proved that God was satisfied with Jesus’ blood sacrifice for sins and that God’s new covenant had begun. In 1 Corinthians 15, Paul addressed how the resurrection is essential to the gospel. In verse 17, Paul writes, “If Christ has not been raised, your faith is worthless; you are still in your sins.”

If Christ had remained dead, His death would have meant nothing more than yours or mine. Humanity would still be without hope. Jesus’ resurrection gives us hope that we one day too will be raised and changed. God gives us victory over death through Jesus. Emphasize to the kids you teach that Jesus is alive! Share with them that they have a special purpose: to tell others that Jesus is alive. He is reigning as King today over all of creation.

You can use the following activity to reinforce Bible learning this week:  Provide a bag of dried beans and a bucket. Guide kids to pour what they think is 500 beans onto the table. Help kids count the beans after they have poured them, collecting all the beans in the bucket. Explain that Jesus appeared to more than 500 people after He rose from the dead. Ask kids if they would believe something that 500 different people told them had happened. Review Luke 24:36-43. We know that Jesus is alive today!