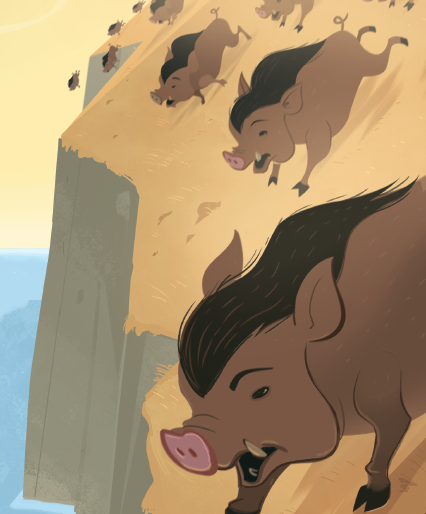 Thank you for continuing this journey with Truth Quest. In yesterday’s Bible story, Jesus displayed His power over evil. In the midst of His public ministry, the Jewish religious leaders began plotting to kill Jesus. (See Mark 3:6.) So one day, Jesus went to a land on the east side of the Sea of Galilee, where Gentiles lived. In that land was a man who needed help. (Note: The Gospel of Matthew describes two men.) An evil spirit was inside the man, and he suffered greatly. The people had tried to control the man by tying him up with chains, but the man broke free. So he lived alone in the tombs, crying out day and night.

The healed man wanted to follow Jesus, but Jesus told the man to go home to his own people and tell what the Lord had done for him. The man obeyed Jesus. He testified to the cities in that area about the Lord’s mercy, and the Gentile people were amazed.

In His teaching, Jesus said, “If I drive out demons by the Spirit of God, then the kingdom of God has come to you” (Matt. 12:28). Jesus—as well as the Bible—is clear that Satan exists, and he and the demons work against God and His purposes. Jesus has power over evil. Only Jesus had the strength to control the man with the evil spirits. Jesus used His power to free the man. He has power over everything. Jesus came to earth to destroy the Devil by dying on the cross. One day, Jesus will end evil forever.