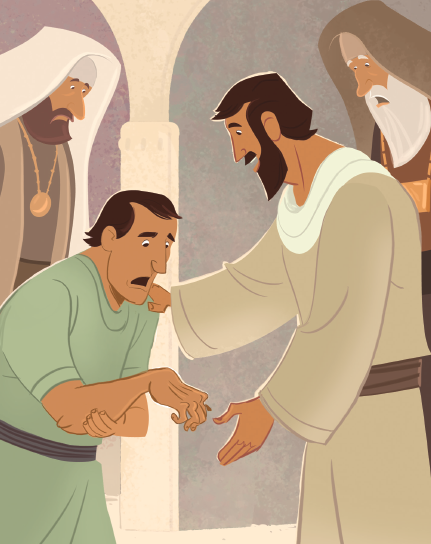 Yesterday, our kids learned that four friends brought their paralytic friend to Jesus. Kids also learned that from that time, the Pharisees kept a watchful eye on Jesus, to see if they could catch Him in sin. One Sabbath as Jesus taught in the synagogue, a man in the synagogue had a paralyzed hand. The religious leaders knew Jesus had power to heal people. They watched to see if He would heal on the Sabbath. According to the law, people should not do work on the Sabbath.

Jesus was not only aware of the scribes and Pharisees watching Him, but He knew their thoughts as well. So Jesus called to the man with the paralyzed hand. “Stand up here,” Jesus said. So the man stood, and Jesus addressed the religious leaders.

“Is it lawful on the Sabbath to do what is good or to do what is evil, to save a life or to kill?” Jesus asked. The religious leaders did not answer. The hardness of their hearts made Jesus sad. They didn’t understand God’s purpose for the Sabbath. Jesus told the man, “Stretch out your hand.” The man’s hand was healed. The Pharisees and scribes were angry, and they discussed what they might do to Jesus.

Jesus is the Lord of the Sabbath (Luke 6:5), meaning that He has control. But Jesus hadn’t come to get rid of the Sabbath; He wanted to remind the people why God gave them the Sabbath. (See Ex. 20:8-11.) God intended for the Sabbath to be a blessing to His people, a day of rest from their hard work. But the Pharisees made the Sabbath all about following the rules, making the Sabbath a burden instead.

Jesus showed that God’s laws were meant to help people, not to hurt them. Jesus acted in love, even on the Sabbath. The religious leaders planned to kill Jesus. They did not know Jesus was going to die to show God’s love to the whole world. God provided forgiveness and salvation through Jesus’ death on the cross.