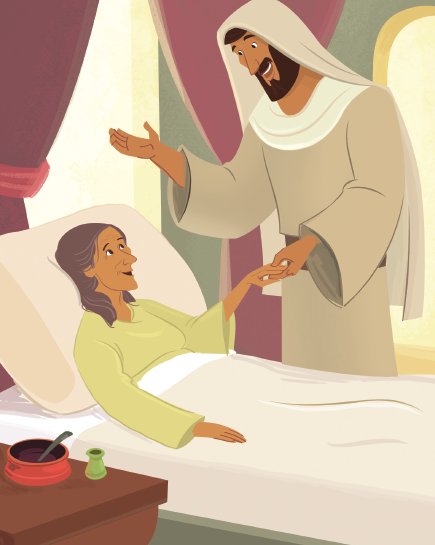 Thank you for continuing this journey with Truth Quest. Jesus’ fame was increasing. His ministry had begun with the calling of His disciples. Now Jesus traveled with them in the region of Galilee, teaching and performing miracles. The people recognized that Jesus wasn’t like other teachers; He taught with authority. He had even demonstrated His power over evil spirits by healing a man in the synagogue. News about Jesus was spreading. The subject of conversation around Galilee was changing. Who was this Jesus?

Jesus was in Capernaum when He went into the house of Simon Peter and Andrew, two of His disciples. Peter’s mother-in-law also lived in the house, but she was ill. A fever had confined her to bed. Jesus’ disciples told Jesus about the woman’s condition, and Jesus went to her side. Touching the woman’s hand, Jesus healed her. She immediately got up and began to serve Jesus and the others in the house. Serving Jesus and living for Him is how we can show we are thankful to Him.

People in the area heard about the healing of Peter’s mother-in-law, and they came to Jesus to be healed too. That evening, people came to Jesus afflicted by illness or evil spirits, and Jesus healed them.

The prophet Isaiah wrote that the promised Messiah would bear our sickness and carry our pain. Jesus fulfilled this prophecy as He healed people. Sickness exists because the world is broken by sin. One day, when Jesus returns, there will be no more sickness because Jesus dealt with sin on the cross. Jesus’ healings brought a glimpse into the kingdom of God, the world in which Jesus makes all things new - the way God intended - when He comes again. (See Rev. 21:4-5.)