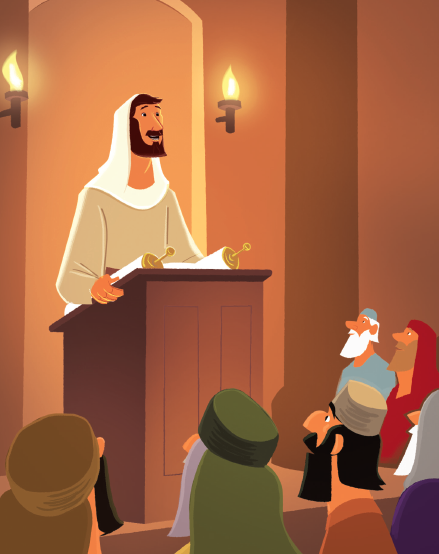 Thank you for continuing this journey with truth Quest!  Sunday's Bible story takes us to Jesus’ hometown of Nazareth. Jesus was about thirty years old when He began His ministry. After Jesus’ baptism and temptation, Jesus traveled to Jerusalem for the Passover. Then, He headed north to Galilee through the region of Samaria, stopping at Jacob’s well to talk to a Samaritan woman.
Jesus began teaching in the synagogues. On the Sabbath day, Jesus went into the synagogue in Nazareth. He read aloud the words of the prophet Isaiah. (See Isa. 61:1-2.) Jesus sat down. Everyone’s eyes were on Him as He explained, “Today as you listen, this Scripture has been fulfilled.” What was Jesus saying? Jesus was saying, It’s Me. The words Jesus read were coming true. Some of the people might have remembered Jesus from His youth. They asked, “Isn’t this Joseph’s son?”
Jesus knew their thoughts; Jesus had performed miracles in Capernaum, and the people wanted Jesus to do miracles in His hometown too. Jesus reminded them of two Old Testament accounts. Many widows lived in Israel when the prophet Elijah was there, but God sent Elijah to help a widow in another country. And Elisha likely encountered Israelites who had leprosy, but he healed Naaman the Syrian. Jesus wanted the people to understand that His miracles were an act of grace—a gift. No one deserves God’s grace, so God may show grace to whomever He pleases. The people were angry. They drove Jesus away, intending to kill Him, but Jesus escaped through the crowd.

Hundreds of years before Jesus was born, the prophet Isaiah wrote about God’s plan to send a Messiah. He would bring good news and redeem people who were broken and hurting. Jesus read Isaiah’s words and told everyone who was listening that He is the promised Messiah.