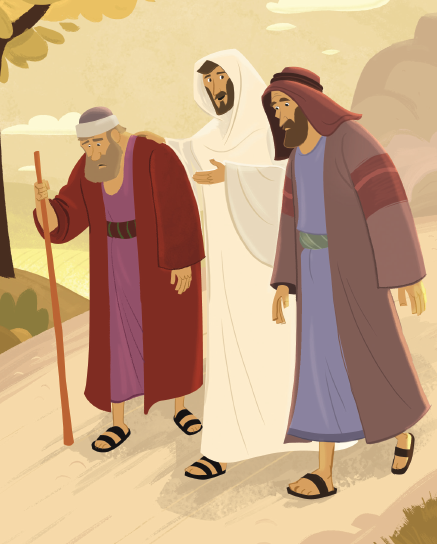 Thank you for continuing this journey with Truth Quest. This week we were in Luke 24:13-35 and Mark 16:12-13, as we discovered Jesus’ teachings after His resurrection.

On resurrection morning, the angel at Jesus’ tomb asked the women, “Why are you looking for the living among the dead?” (Luke 24:5). Even when Peter and John ran to the empty tomb to see it for themselves, Peter was amazed but uncertain (Luke 24:12), while John believed (John 20:8).

That same day, two disciples were walking to Emmaus, arguing about recent events. Jesus began walking next to them, but God prevented them from recognizing Him. (Luke 24:16) Jesus simply asked them what they were arguing about. They stopped walking. How could He not have heard about what happened over the last three days?

The two disciples had hoped Jesus was the Redeemer of Israel. Their hopes were crushed because Jesus had died. Graciously, Jesus explained to them why the Messiah had to die, starting with Moses and the Prophets. Jesus showed them how the Scriptures point to Him. (Luke 24:27; cf. John 5:39)

When they reached Emmaus, the disciples urged Him to stay and eat. As soon as Jesus blessed the bread and broke it, “their eyes were opened” and they knew they’d seen Jesus. (Luke 24:31)

Teach your kids the Bible is not a moralistic tale. The Bible is about Jesus. When Adam and Eve sinned, God began working out His plan to send Jesus to rescue people from sin. (Gen. 3:15) All of the Old Testament points forward to Jesus’ life, death, and resurrection - the time when Jesus would bring God’s promised salvation for sinners.

Here is a fun family activity to reinforce learning: Give each family member a Bible. Call out a book of the Bible and challenge each person to find it. Vary the difficulty of the book being found. Read Luke 24:13-35. Remind kids that Jesus taught that the Bible is about Him. Tell kids that no matter where they turn in the Bible, they can know that it all points to God’s plan for Jesus to come to earth, die on the cross for our sin, and rise again three days later as a picture of His victory over sin and death.

How to Care for Your Children During Times of Uncertainty

Voices From the Church During the Crisis: A Doctor's Perspective