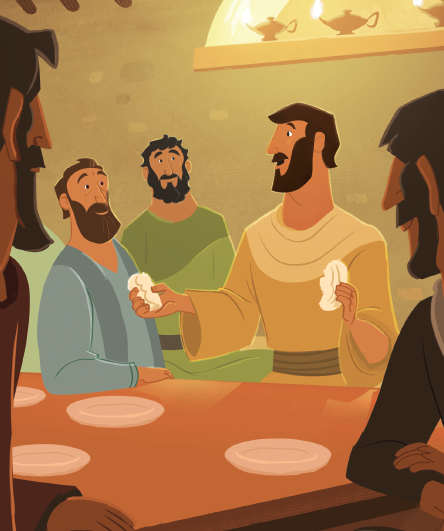 Yesterday in Truth Quest, our journey took us to The Last Supper in John 13–17. Although this is the same event as we focused on last week, this week we emphasized Jesus washing the disciples’ feet. Our story started when Judas Iscariot, one of the Twelve, had approached the religious leaders. (Matt. 26:14-16) For 30 pieces of silver, Judas agreed to betray Jesus. Hundreds of years before Jesus’ birth, David prophesied the Messiah would be betrayed by a close friend - one who broke bread with Him. (Ps. 41:9) Jesus knew Judas Iscariot’s true motivations from the moment Jesus called him to be a disciple. (John 6:70-71; 13:18-19; 17:12.) Jesus’ death and resurrection was God’s plan from the very beginning. (Acts 2:23)

During the Passover meal on the night He was betrayed, Jesus did something very unusual. Knowing that His death was near, Jesus washed His disciples’ feet - even the feet of Judas. (See John 13:2-11.) Jesus set forth an example of love and humility for His disciples to mirror in their own actions towards each other. (John 13:14-16)

In the Old Testament, God made a covenant - or promise - with His people. He gave them commandments to follow so they could live in right relationship with Him. God’s people broke the covenant. They didn’t obey God, and they didn’t love Him. Jesus made a new covenant by dying on the cross. He brought forgiveness and made the way for people to know and love God again. When believers participate in the Lord’s Supper, they remember the last night of Jesus’ life, when He prepared to take God’s wrath upon His sinless shoulders. Believers also proclaim His death and resurrection until He returns for His church, like He promised. (John 17:24; 1 Cor. 11:26)

Here is an idea for a family devotion time - Begin your time with prayer. Review John 13 - 17. Using a pitcher of water, a bucket, and a towel, wash your family members’ feet. Remind kids that Jesus washed His disciples’ feet at the last supper. There were no paved roads in Jerusalem, and everyone walked everywhere they went. Feet were probably stinky! Normally, the least powerful person in a household would wash feet, but in this story, Jesus, who has the power of God, humbly washed His disciples’ feet.