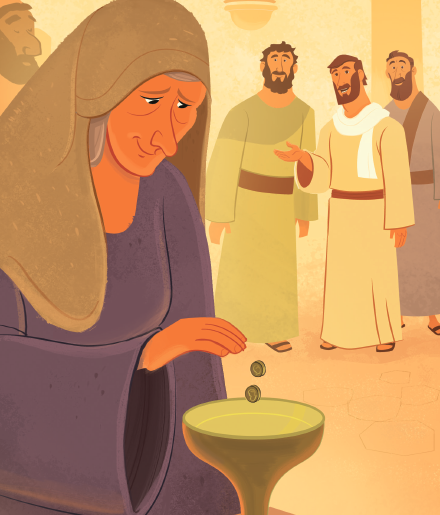 Yesterday's Bible story comes from Mark 12:41-44 and Luke 21:1-4, and it focuses on the widow’s gift. While Jesus was in Jerusalem in the days leading up to the Passover, He often taught in the temple complex. The scribes and Pharisees questioned Jesus in hopes of tricking Him into saying something that would provoke the Romans against Him (Luke 20:20) or would make Him seem like a blasphemer. But all their questions simply proved that Jesus, the Son of God, had a wisdom and authority that could only come from God. (Matthew 22:46; Mark 12:34)

After warning the people against the scribes, Jesus sat down where He could watch people give their offerings. The treasury of the temple was located in the women’s court. Thirteen trumpet-shaped receptacles were set up to receive donations, purification offerings, and the half-shekel tax. Jesus watched as the wealthy put large sums of money in the offering boxes. Then a poor widow put in two small copper coins.

Jesus summoned His disciples and remarked, “I assure you: This poor widow has put in more than all those giving to the temple treasury” (Mark 12:43). Undoubtedly the disciples were astonished. The widow had given the smallest amount of currency in Jesus’ time. Hadn’t Jesus noticed all the others giving more?

The widow was desperately poor. Jesus mentioned that she had given everything she had to live on. The woman, who should have been a recipient of charity, instead gave to God, trusting Him to take care of her needs. The wealthy people, however, had given out of their surplus. They gave a lot of money, but it did not really “cost” them much.

Jesus gave up everything He had in heaven to come to earth and save us from our sins. Jesus even gave up His own life, dying on the cross in our place. When Christians know and love Jesus, we can serve Him as the Lord of our lives. Out of love for Jesus, we offer everything we have. God takes care of His children and rewards those who seek Him. (Matt. 6:31-33; Mark 10:29-31; Heb. 11:6)

Continue the conversation with the following activity: Ask each family member to go get the best gift she has been given recently. Guide each family member to show and tell about her gift, explaining why it is her favorite. Remind kids that everything we have is a gift from God. Read Mark 12:41-44. Discuss ways you can serve Jesus with what you have, no matter how much or little.