The Comeback; Together Again is coming Sunday, June 7th!

Back in 1999, before I met my husband, Eric, I went through a five-month missions training program called YWAM (Youth With A Mission). That was my first introduction, encounter, and experience with speaking in tongues and prophetic gifts. Since then, I believe God has given me those spiritual gifts, but for years I’ve never had any formal teaching or guidance.

In January 2013, a member of our Home Group, Sarah Libera, asked if I’d go with her to a prophecy workshop that Darin Slack was hosting. I said yes, and was excited to learn more about what God had been doing in my life for years.

On the first night of the workshop, Aron felt the Lord gave him a picture for me. I was in a kayak in the middle of a calm lake, paddling with ease and quite comfortable. This accurately described my life for years, sharing words God had given me for individuals. But God was starting to direct my kayak downriver toward the rapids. The first few paddles over the rapids were going to be quick. Once I got into the rapids, I was going to paddle and the water was going to continue to carry me downriver.

Through the workshop, God taught me how to clarify the words and pictures He was giving me. He also taught me how to hear His voice in the midst of the challenges of daily life, like being the mom of two little boys. I learned to not put God in a box in regard to how He wants to use me. I’m just His vessel. It’s not about me at all. It’s all for His glory.

Throughout the five-week workshop, God continued to stir up something in my soul that I felt I could no longer contain. I didn’t know what it was, but I knew He was preparing me. After one of the Sunday messages in March, the Lord asked me, “What are you doing here? Specifically, in your home in Sanford?” 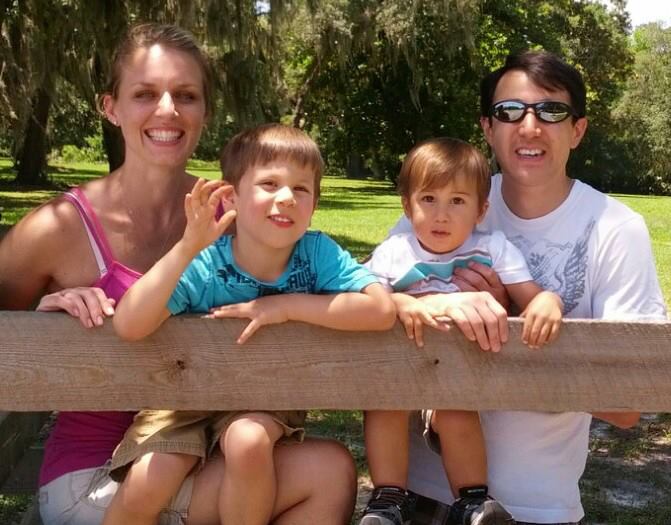 I know God has placed our family there, in our very house, for a specific reason. So often I can go through my day, accomplishing my tasks, without pausing to asking God for how He would have me reach out to those around me, whether sharing the Gospel or a word of encouragement.

That same Sunday in March, I felt God was telling me to go talk to Debi Walter. God had given her a picture for me of a treasure chest. She said God has been preparing me for years, and now it’s time for those things that have been welling up within me to come out. Those things are inside this chest, and God is the one in control of the hinges. The chest isn’t going to open all at once but in spurts as He imparts boldness to me—for His glory. He’s going to give me His boldness to speak to others. God put two names in my mind.

There is an elderly man who lives across the street from us, alone. A couple of years ago, he suddenly lost his wife after almost 60 years of marriage. We’ve chatted briefly for years, but never about God.

God has been teaching me that regardless of how insufficient I feel, He is greater. When I’ve tried to figure out on my own how to transition neighborly chat into talk about God, I couldn’t find an easy way or smooth transition. But God has given me His boldness. I don’t need the perfect opportunity to share the Love of God. He’s teaching me that those five seconds of awkwardness are entirely worth it. It is for the sake of their soul!

One day, my neighbor stopped his car by my house on his way to run errands. After our typical greetings and catching up, God gave me boldness to ask him, “Has anyone ever talked to you about Jesus?” We talked about how he had attended church for years while he and his wife raised their four boys. He said he hadn’t been to church in a long time.

A few weeks after that, my kids and I stopped by my neighbor’s house. We talked for quite some time about his wife. He was missing her. One of his family members had told him he would see her again, and he asked me what I believed. We talked about what a relationship with Jesus means.

More often than not, when I see my neighbor, somehow we end up talking about God. I don’t know what God is speaking to his soul, but I know He is speaking.

The second person God brought to mind is a woman who is a member of an organic veggie co-op I host at my house. I know that God has hand-picked each co-op member to come to my home for a reason.

A few weeks ago, she came into my house to pick up her produce. I knew God was giving me boldness to forget about those five seconds of awkward transition. I said, “Hey, I don’t know if you believe in God, but you’ve been on my mind for the past few weeks. I’ve been praying for you.” She quietly replied that she doesn’t believe in God, yet believes in positive energy. If you give to others, it will give back. She also said she doesn’t know anything about God, and it kind of freaks her out. However, she thanked me for praying for her. We have agreed to get together for lunch sometime soon. I don’t know what future conversations may hold, but I do know that God has already opened the door. He is the one giving me boldness to speak—not for my agenda, but for His glory.

So, I ask you the same question that God asked me. What are you doing here? Who has God put into your life for the purpose of sharing the Gospel?

Encouragement from a Physician