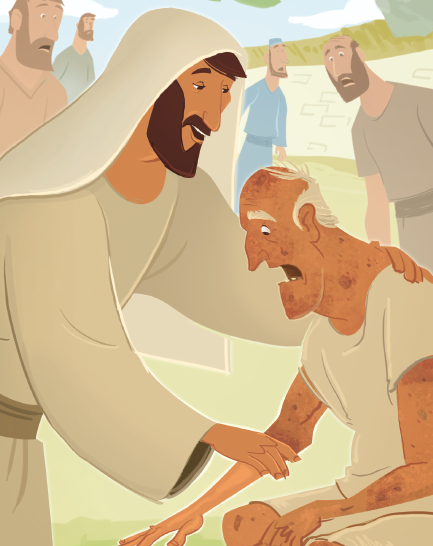 Thank you for continuing this journey with Truth Quest. In ancient Israel, living with a skin disease wasn’t easy. It was painful and isolating. Leprosy is a disease caused by bacteria, and it affects the skin, nerves, and mucous membranes. The disease can cause deformities in hands and feet and paralysis of some muscles. Leprosy is contagious, and the people of Israel had laws about what to do when a person becomes infected.

In yesterday’s Bible story, a man with a serious skin disease approached Jesus and fell down before Him. “If You are willing, You can make me clean,” he said to Jesus. The man’s words were more of a truthful declaration than a request. He clearly trusted in Jesus’ power to heal people, and he longed to be healed himself.

Jesus reached out and touched the man. “I am willing,” He said. Typically, no one touched a leper. Touching an unclean person would make you unclean too. But Jesus didn’t become unclean. Instead, the diseased man was immediately healed.

Not only did Jesus have the power to make a leper clean, He was willing to make him clean. Like the disease of leprosy, sin deeply affects all people and makes them spiritually dead. Jesus willingly died on the cross and rose from the dead to save us from our sin and give us new life.