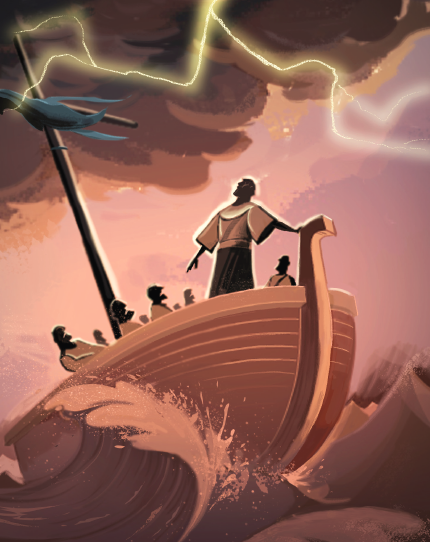 Thank you for continuing this journey with Truth Quest. Over the next five weeks, kids will discover that Jesus is powerful. In today’s Bible story, Jesus showed His remarkable power over creation. After a long day of teaching, Jesus and His disciples got into a boat to cross over to the other side of the Sea of Galilee. When their short sailing trip was interrupted by a violent storm, the disciples found themselves in danger with nowhere to turn—except to the One who created all things.

The Sea of Galilee is actually a freshwater lake in northern Israel. It sits nearly 700 feet below sea level and is surrounded by tall hills and mountains. The geography contributes to strong downdrafts and sudden storms that can quickly overtake the lake. This type of windstorm is what the disciples faced as they crossed the sea with Jesus.

Several of the disciples were experienced fishermen. They had spent significant time on the Sea of Galilee, but this storm was so strong. The waves overtook the boat, and the disciples were afraid they would drown. As the disciples panicked, what was Jesus doing? He was sleeping! The disciples woke Jesus. The situation was out of their control, but their reaction was full of irony: “Teacher! Don’t You care that we’re going to die?” (Mark 4:38).