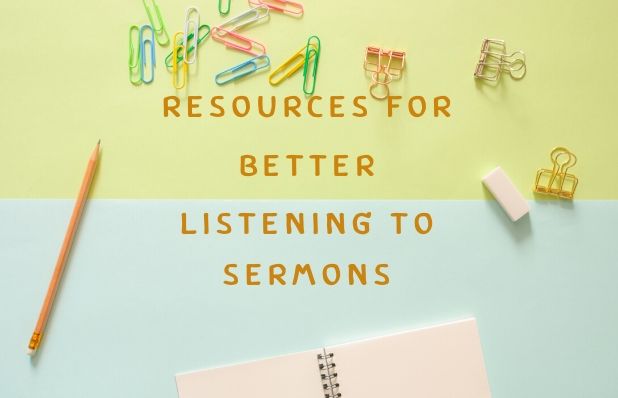 Have you ever had a hard time remembering specifics from the Sunday morning sermon only a few hours after service? It’s embarrassing but I know, I’ve been there myself. It’s so easy to listen and even be encouraged in the moment but forget what I heard as I go about my day and week.

It reminds me of one of the most challenging verses I know in scripture, James 1:22-25:

“But be doers of the word, and not hearers only, deceiving yourselves. For if anyone is a hearer of the word and not a doer, he is like a man who looks intently at his natural face in a mirror. For he looks at himself and goes away and at once forgets what he was like. But the one who looks into the perfect law, the law of liberty, and perseveres, being no hearer who forgets but a doer who acts, he will be blessed in his doing.”

How can I be a doer of the word if I can’t even remember what I saw when I was looking at it? One often overlooked step in applying the word of God is listening well to the word of God. But how do we listen in a way that helps us not forget?

Thankfully we have an example in scripture of a people who did this well in Acts 17:10-11.

“The brothers immediately sent Paul and Silas away by night to Berea, and when they arrived they went into the Jewish synagogue. Now these Jews were more noble than those in Thessalonica; they received the word with all eagerness, examining the Scriptures daily to see if these things were so.”

Underneath my desk in my home office there is a stack of old notebooks. Every once in a while, I pick them up and consider throwing them away but I can never bring myself to do it. These bent up, half used, semi-torn sheaves of paper are filled with notes I took in my late teens and early 20’s. Most of it isn’t profound. A lot of it is quite the opposite. But what I see when I look inside those notebooks is the spiritual formation that took place in the early years of my walk.

I get convicted thinking about those notebooks. Because somewhere along the way, I stopped being as eager with the word of God. It’s as if I came to believe that the work God was doing in me through his living scriptures was mostly done. I know this makes me sound foolish. It’s because I am foolish.

So maybe you are like me. Personally, I’m rusty at being an eager listener to God’s preached word. So, I’m not afraid to admit that I need help. I’m going to be using this resource below to help me to better listen, remember, and apply God’s word in the coming months. I would like to invite you to join me. Let’s be a church full of Bereans that don’t forget the word but instead are doers, examining the scriptures daily.

Resources for Sermon Listening and Applying

The Surprise Blessings from Waiting on a Storm

The Surprise Blessings from Waiting on a Storm

How Can I/We Make A Difference: Funtober Fest

Back To School Supplies Drive and Event